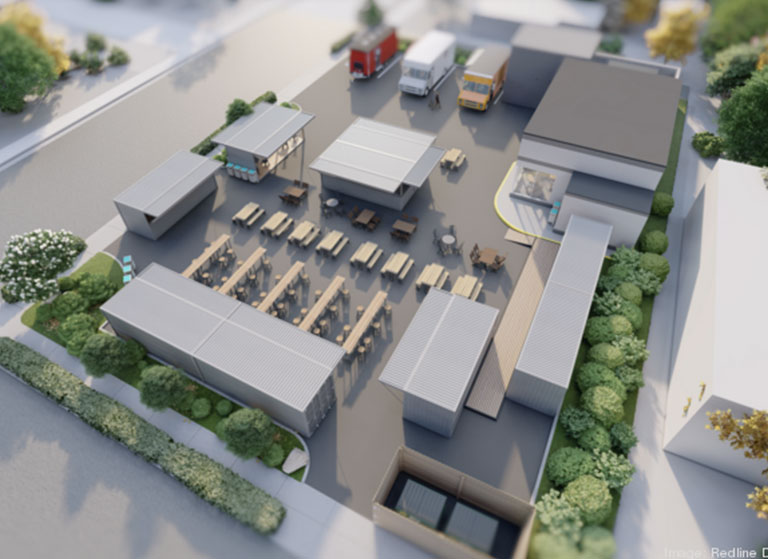 The repurposed shipping container development Boxyard RTP made a splash in the Triangle market last year as the first of its kind in the area. Now, a local team has plans for a similar version of the concept in Raleigh’s Glenwood South.

A 0.32-acre lot on the corner of Glenwood Avenue and Peace Street in downtown Raleigh is set to be transformed into a 14,000-square-foot food and beverage concept by Raleigh’s CityPlat and Local Icon Hospitality. Currently housing an auto shop, the lot was purchased by CityPlat and Maryland investment group Modalia Capital in December 2020 for $1.5 million. Located at 701 Glenwood Ave., the spot drew a lot of interest from groups wanting to build a tower and other large projects, CityPlat’s Gaurav “G” Patel said.

“We felt a food and beverage operation would be the best fit for us at the location. With all the towers that are going on we wanted to preserve what’s existing and do an adaptive reuse,” said Patel, a restaurateur who joined CityPlat in 2020.

The project, called The Yard, will include an upfitting of the existing building and between 15 and 20 repurposed shipping containers placed in the exterior. Developer CityPlat brought on Raleigh group Local Icon Hospitality to operate The Yard. The concept will feature a kitchen and service area in the existing building, a courtyard seating area, and four to five bars and hangout areas inside shipping containers. Some containers will be stacked on top of one another, creating two stories, said Jon Seelbinder, founder of Local Icon Hospitality. The food offerings will rotate, and could include sandwiches, burgers or fried chicken. Seelbinder might bring in food trucks as well, he said. The Yard concept was chosen over other projects due to its shorter completion timeframe, compared to a tower or bigger project, Patel said. The lot is currently zoned for neighborhood mixed-use development up to three stories, according to Wake County Property records. The project is moving along in the planning and product development stages with Redline Design Group heading the design. The team has been working on this for about six months, Patel said. He expects construction to begin in the early to late fall and take between 90 and 120 days. The total buildout cost will be $1.1 million, Seelbinder said.

Seelbinder is a longtime friend of Patel. Prior to joining CityPlat, Patel founded Triangle hospitality group Eschelon Experiences. He owned several restaurants and bars in the area, including Edwards Mill Bar & Grill and The Haymaker, before filing for bankruptcy in 2019 and later closing some of his concepts. Patel is also a co-founder of Social House Vodka.

“We were very diligent on the right operator. Obviously, aesthetics is really important and we wanted to make sure we had somebody experienced so it’s tastefully done,” Patel said about Local Icon Hospitality.

While Patel has worked with Seelbinder previously, The Yard is CityPlat’s first venture with the hospitality group. Local Icon Hospitality Group began in 2012 and currently has five locations – The Architect, Virgil’s Taco, The Merchant, The Green Light and Little City Brewing. The group was also behind the now-closed Linus & Pepper’s sandwich shop in downtown Raleigh.

The auto shop on the property, formerly known as Peace Street Inspections, was built in 1956, according to Wake County property records. The building is around 1,800 square feet, Patel said. The property’s total assessed value is $1.48 million. The architecture firm on the project, Redline Design Group, was formerly known as Phillips Architecture. The Raleigh-based firm was acquired by Charlotte’s Redline Design Group in January and has transitioned to operating under the Redline name.

“Our intent is to create a place for gathering for the community that’s being built around there,” Patel said. “Eight months to nine months out of the year, North Carolina has amazing temperatures. It’s a food and beverage operation that’s going to have multiple food products and in an open courtyard. It’s just a good community gathering place.”