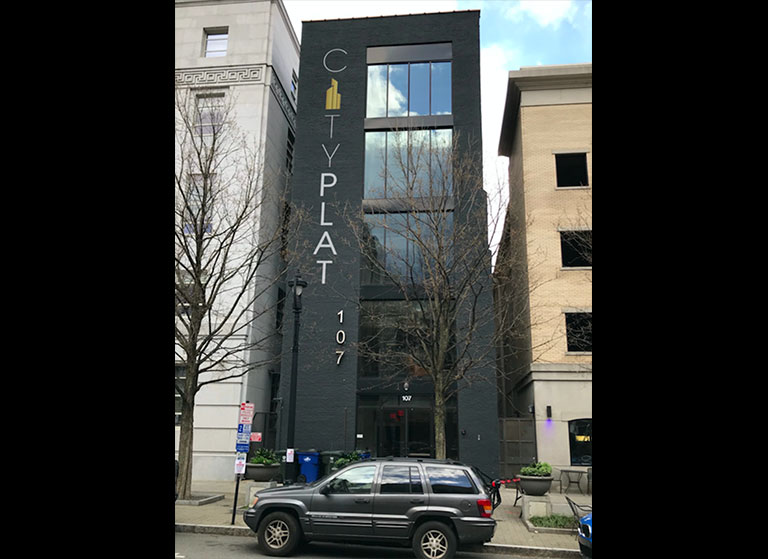 A real estate company with a growing presence in the Triangle will launch a new headquarters in the heart of downtown Raleigh after buying an office building.

CityPlat, founded last year in Cary, closed on a 5-story office building at 107 Fayetteville Street that will serve as the company’s new headquarters. The company paid $3.2 million for the property and has outfitted the front of the building with a 3-story CityPlat logo.

“We knew we wanted to head downtown. We knew that we wanted to be in Raleigh,” says CityPlat partner Vincenzo Verdino. “A lot of what we do is centered in Raleigh.”

The company plans to take up the third and fourth floors, which are internally connected by a staircase. Verdino says this new space will provide room to grow and collaborate as the company looks to continue its expansion and strengthen the brokerage side of the business.

“We focused a lot on the development side in the beginning of the year, and the three of us decided we want to focus more on the brokerage side,” Verdino says. “This allows us to grow with additional brokers and it’s more cohesive to work collaboratively.”

Floors one, two and five are already occupied by existing tenants, though the first two floors are expected to become available this summer.

Verdino says the purchase of the new headquarters property has been in the works for a while, and though the spread of COVID-19 had presented some additional hurdles with lenders toward the end of the arrangement, the sale was able to go through. Now, the company is waiting for the crisis to pass before moving into its new space.

“If we were in normal times we certainly would have a moving company working over the weekend, Verdino says. “We’re going to be playing it by ear. Like everyone else, we’ll be working from home for the rest of April.”

Since it’s founding, the company has developed several projects, including CityPort, a 6-story, 43-unit condo project in Durham; and the Distillery, a 13,000-square-foot mixed-use development in Garner.

CityPlat was previously operating out of offices at 119 SW Maynard road in Cary.